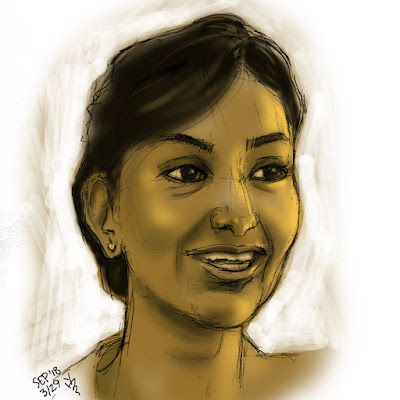 I hate to start at the end, but once I post, this will be the thumbnail.
This image started as a stock photo image from a mailer I received. When I drew this and Face #4- Burt Reynolds in my sketchbook, I wanted to throw a watercolor wash, but I noticed the paper was already warped from a wash I did on the other side of the page. If I attempted it, the pigment would just pool in the valleys. So I scanned the page and isolated the pencil scratches. 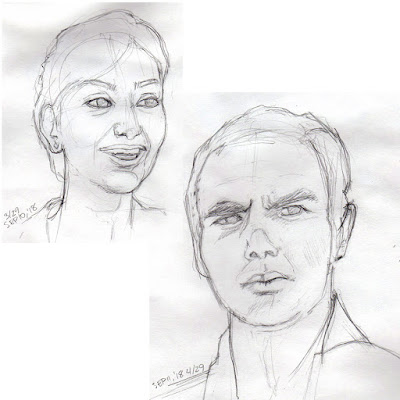 See the dark waves across the paper? All the color was gonna pool there if I painted it.

I had no idea what I was doing in Photoshop. I've looked at a few Ctrl+Paint videos and sorta have the idea, but I have a LOT of practice ahead of me. I'm rather pleased with the results, but I also know it mostly works because of my understanding of value. My painting technique is pretty meh. LOL! 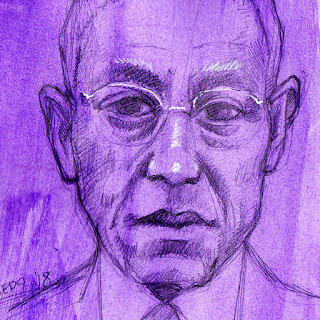 I was watching "Better Call Saul" the other night.

I can see that I'm still a bit rusty. I'm annoyed that I can't seem to get eyes down right now, which is weird because it used to be all I did. On the other hand, the planes on the cheeks and jowls were fun to work on and I really wanted to keep rendering. It's like not paying attention to drawing, but wanting to color.

Sketchbook primed with acrylic wash, mechanical pencil, white gel pen and a whole lot of twiddling around with curves in photoshop.

I also did a little bit of gel pen correction in PShop. I kinda scribbled in the hi-lights on the top rim of the glasses and it was too thick and scribbly (and made it really contrasty), so I patched it a little to make it thinner.
Posted by Susie at 12:05 PM No comments:

I've been suuuper scarce here. It's hard to keep current with posting when there's so many social media sites. But at the end of the day, I haven't actually been doing anything that I thought was worth sharing.

OTOH, it IS time for 29Faces again. I may as well try to stay on top of that here. But if you're wondering what else I've been up to, head over to my Instagram. It's way simpler for me to post quick images there.

29Faces is a challenge created by Ayala Art. A human(ish) face a day, every day for an entire month. Last night the prompt "Aretha Franklin" was given. I'm not real happy with how it came out, but I'm also trying to accept what happens, finish and move on. I didn't think I was this rusty. 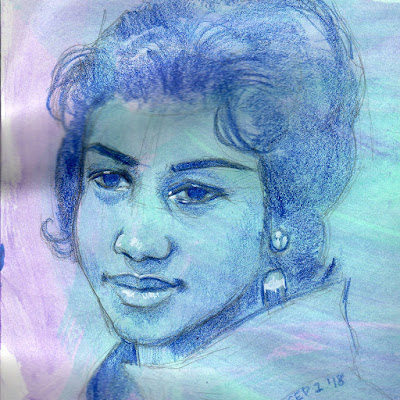 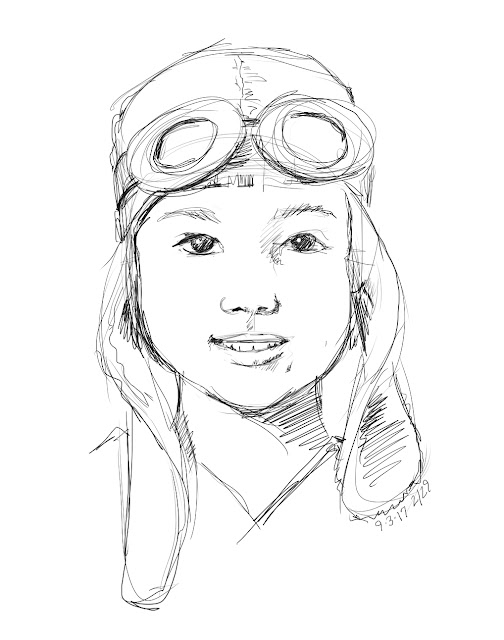 Starting late and not catching up is rather inauspicious, but dammit, it's gonna get done.

A month ago my hard drive wouldn't boot and I had to get a new one. I loaded Clip Studio on it and didn't give it another thought until today. If I'm gonna do the things I plan on doing, I may as well launch it and play around with it. But then CS wanted me to enter the license and it failed! Turns out that I had to deactivate and then reactivate it with the current hard drive. Talk about momentum killer.

I still feel rusty. I hope I can feel a bit more comfortable soon.

This face was grabbed from the internet. The girl is actually younger, but I tend to age children. I don't know how it happens.
Posted by Susie at 11:29 PM No comments: 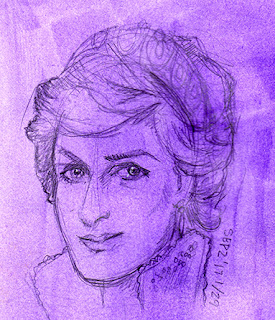 I've been seriously neglecting this blog in favor of Instagram, but I've also been neglecting a lot of other stuff too! I guess 29 Faces keeps me coming back if only for a little while.

Today is a warmup inspired by Ayala Art's prompt: Princess Diana. I never thought I'd draw her because I'm not so much a fan of the hype, but since I was completely unprepared for 29 Faces September (see: neglect), it seemed as good a face to tackle as any.

Looking at her photos, she was the Queen of Side Eye and Serious Shade. Maybe that was part of her allure. I don't think I made her snarky-looking enough here, but you get the idea. I originally wanted to do this in ink, but I saw the crown and noped outta that.
Sketchbook paper, acrylic wash, mechanical pencil. Scanned and adjusted to Hell.
Posted by Susie at 11:47 AM No comments:

Not only have I neglected the blog, but I've also missed a couple days when my mother got sick. She's feeling fine now, but now I have to catch up with the Faces and dayjob stuff. 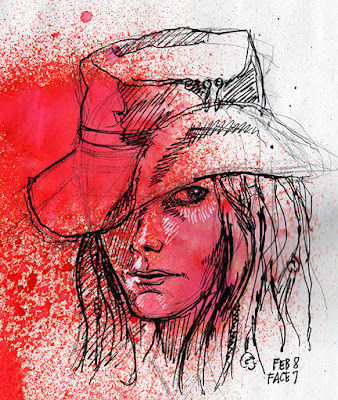 Anne Bonny from "Black Sails". Dylusions spray ink on sketchbook, sketched in pencil and inked with a Tombow fudenosuke pen. 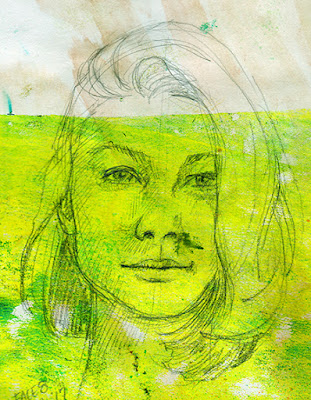 Face 8 was from a stock photo. My sketchbook was gel printed on and I just drew the face on top. 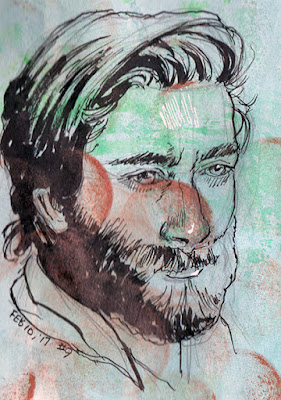 Face #9 was also from stock photo. I had washed over this sketchbook page with acrylic and then I had a dabber with Copper Distress paint on it. I think I wiped the dabber on the page trying to get all of it off. Months later I drew this face on it. 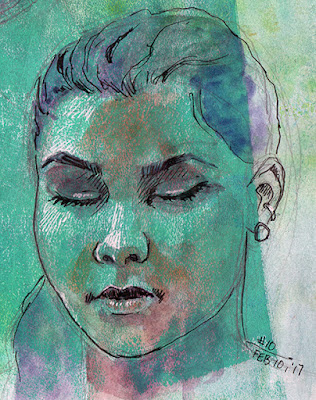 Face #10 was also a stock photo. Sketchbook, gel print, acrylic wash. Then drawn in pencil, inked with a Tombow Fude pen and I then added a little color to her face and hair with Koi watercolors. It was about here when I started to seriously wonder if i could keep this up. 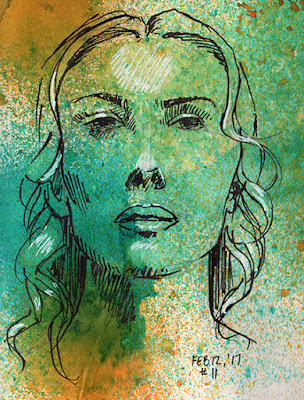 Face #11 was supposed to be Eleanor Guthrie from "Black Sails", but it really didn't come out. Which is a shame because the splatter from the Distress ink sprays are really nice here. Ah well. 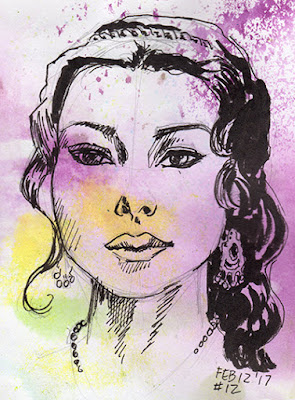 Face #12 is max from "Black Sails" I rushed this and the previous face in a rush to catch up. I was really unhappy with both of them though. I use my sketchbook as a blotter for other projects, so the color is the ink from that. Penciled, then inked with Fude. 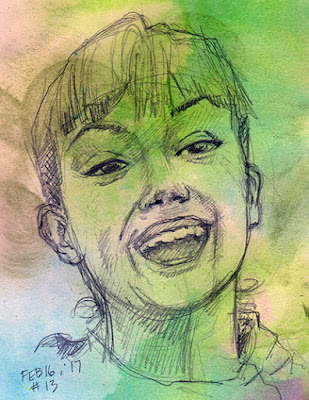 So there I was, kinda beating up on myself for doing a coupla lousy drawings and then my mom got sick and I had to look after her for the weekend. I saw it as a sign from the universe to take a small break.Maybe recharge or reboot or something. As soon as Mom felt better, I drew Alison from "Orphan Black". Random ink on sketchbook, drawn in pencil. Recognize the circles? That's me trying to clean off a dabber. 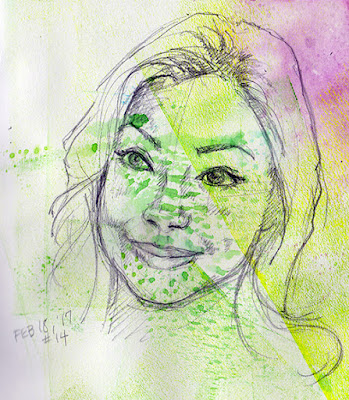 #14 Krystal from "Orphan Black". At first I tried drawing from a different photo, where she was kinda making a face, but it just wasn't working for me. So I changed photos and this one just clicked. Too bad it looks like she was some sort of reptilian skin condition.

I must say, I'm rather pleased with myself for having gotten this far. I'm also trying to get over my need for perfectionism, so posting a few of the drawings that are a little off is a rather big step for me. I feel like I've wasted a lot of time trying to make perfect drawings when I should just share and move on to the next thing.

And I've also just realized that as I'm typing up this post I'm kinda putting off doing my next sketch.
Posted by Susie at 10:50 PM 1 comment:

I've barely kept up with the daily drawing, but I haven't found the time to post them. I feel like I can only get two things done a day and making blog posts isn't high on my priority list right now.

But look! I have faces! 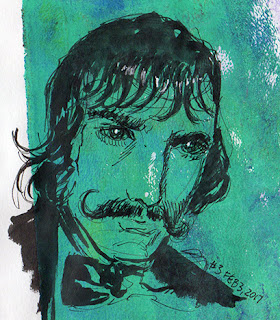 #3. Scribbled right before bed because time was running out on the clock. LOL I can't be happy with everything I do. I'm also learning that getting it done is way more important than having perfection.
Tombow Fude over acrylic gel printed into my sketchbook. 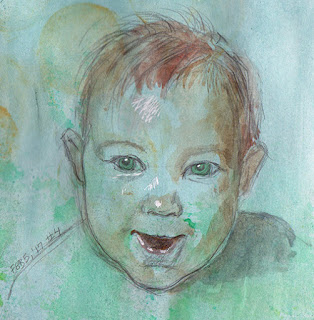 #4. I was lamenting over where one finds images to feed the 29 day beast and my friend came through with stock photos! This was acrylic wash in my sketchbook. The orange dot is that leftover Distress ink you get from the blending tool. Drawn in mechanical pencil, colored with watercolor and then highlighted with white gel pen. 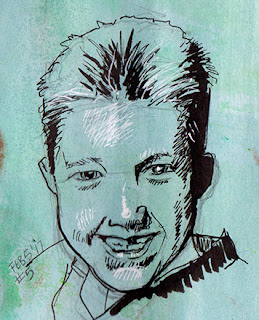 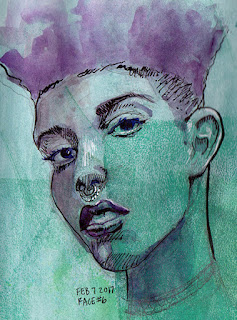 #6. Acrylic wash, gel print background, mechanical pencil, watercolor. Then it looked terrible and I inked it with the Tombow Fudenosuke pen, and put more washes on it. When I scanned it and posted it in Facebook, I then realized that I couldn't get the angle of the face right because the eyes didn't line up to begin with. :shrug: Oh well.
Posted by Susie at 2:25 AM 4 comments:

Susie
I got my BFA in Illustration at the Academy of Art College (since when did it become a University?) and somehow ended up lettering manga for the past 15 years or so.
This is me trying to get back to drawing things. Or at least drawing more/making things while attempting to meet lettering deadlines.
If you want to buy stuff that I've made, designed or want to know more about my lettering work, please scroll down this column

Doing the 29 Faces thing. Be sure to visit the other blogs and share some love!